“I couldn’t dance or write or paint. The only possible opening seemed to be in some line in which I could use my face. This was, in fact, no better than a hundred other faces, but it did possess a fortunately photogenic quality.” – Merle Oberon.

She was one of the great stars of Hollywood’s golden age. An exquisite actress with opalescent eyes, who left an indelible mark on her audience. She rose from poverty stricken circumstances to become a millionaire who married four times, owned several fine houses and became a Lady in 1942. Yet she was a woman forced to live a lie by her production studio.

Her name was Merle Oberon.

Estelle Merle O’Brien Thompson was born on in Bombay (now Mumbai) British India on February 19 1911. Her father was a railway engineer from Darlington named Arthur Terrance O’Brien Thompson and her mother was Constance Selby, who was just 12 when she gave birth. Constance was the daughter of Arthur Thompson’s girlfriend Charlotte Selby, who was a Eurasian with partial Maori heritage from Ceylon.

Charlotte was around 26 when Merle was born, and raised her as her own. Merle would grow up thinking her mother was her sister.

In 1914, Arthur Thompson joined the British Army and later died of pneumonia on the Western Front during the Battle of the Somme. Constance eventually married Alexander Soares and had four other children, who grew up believing that Merle was their aunt. After living in dilapidated flats, they moved to Calcutta (now named Kolkata) in 1917 and Merle gained a foundation scholarship to attend prestigious private school La Martiniere Calcutta for Girls. But she quit school after being taunted about her parentage and was taught at home. 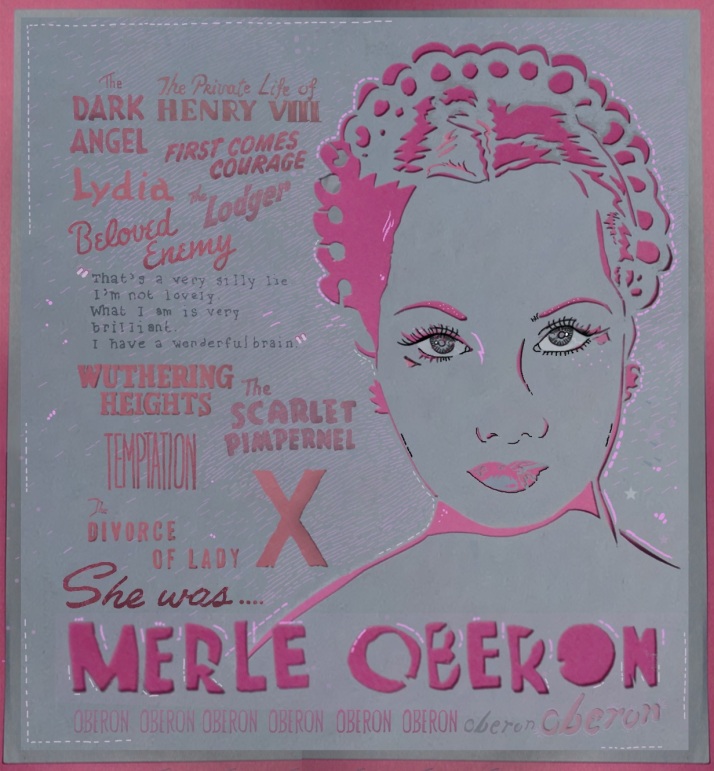 Merle’s first performance was with the Calcutta Amateur Dramatic Society. She worked in nightclubs and as a telephonist under the name ‘Queenie Thompson’. She began seeing Mark Hanna, the head of Paramount Pictures in India, and he sparked her interest in stardom. Through Hanna she met former actor Colonel Ben Finney and secretly hoped the relationship would “pave her way to the movies” (www.sapnamagazine.com). Finney ended the relationship when he learned of Merle’s parentage, but introduced her to Rex Ingram of Victorine Studios in Nice. Merle and her mother moved to Marseilles in France and Ingram was so impressed by Oberon’s exotic beauty that he put her in a film called ‘The Three Passions’ as an extra.

Merle was utterly exquisite. “Her face was as finely-carved as an ivory mask. She exuded the atmosphere of being a great lady: not merely a star,” Cornell Wilde said of her. “I felt as if I had walked into a museum and was looking at a masterpiece of sculpture.” Merle was 5’ 2” and darkly beautiful, with finely chiselled features and opalescent almond-shaped blue-green eyes.

Alexander Korda was a Hungarian-born British film producer and director, and Merle got her first serious break in his picture ‘Wedding Rehearsal’ after Ann Todd dropped out. By this time, Merle had made her way to England and was working as a nightclub hostess under the name ‘Queenie O’Brien’. She continued to get bit parts until Alexander’s Korda’s wife Maria drew her to his attention: “What a striking girl,” she exclaimed.

Korda had wrapped ‘The Private Life of Henry VIII’, but decided to add an early sequence with Anne Boleyn and decided to give Merle the chance of a lifetime. Merle was elated to be offered the part and was captivated by Anne Boleyn: “Those who have written about her have mostly been dry professors who do not understand women. One day perhaps I may write a book about Anne myself,” she was to tell a reporter.

But Merle horrified when she received the script. It was only three pages and less than two minutes of film. Merle later told the London Observer: “When I found that they have given me exactly two (sic) minutes on the screen, that made me mad, and I thought to myself I’ll make them remember those two minutes whatever else they forget. If I don’t, they may get rid of me in a subtle way they got rid of Catherine of Aragon. It wasn’t difficult, really, the lines were so lovely and simple – ‘Mine is such a little neck’ – I remember crying afterward and saying to Alex, ‘what in the world is the matter with me?’ and he said, ‘Don’t worry, that’s acting Merle’!” (www.sapnamagazine.com). The scene was shot in two days and is so poignant and haunting, that those who see it never forget it.

‘The Private Life of Henry VIII’ was a huge success; Merle won great reviews and Korda signed her to a long-term contract. Merle was ambitious, but it was the 1930s and not culturally acceptable to be of mixed origins from India. Merle was forced to pretend that she was from Tasmania – birthplace of actor Errol Flynn. She introduced her mother as her maid, and used creams to lighten her complexion, sometimes enduring terrible skin reactions as a result. In 1940, Merle suffered damage to her complexion from a combination of cosmetic poisoning and an allergic reaction to sulfa drugs. Alexander Korda sent her to a skin specialist in New York, who administered several dermabrasion procedures, but the results were only partially successful. Without make-up, the damage to Merle’s complexion was still evident.

Over the years, Merle would spin a complicated series of stories about her origins, but Tasmania always remained her birthplace. She concocted a story that all her birth records had been destroyed in a fire. The year before she died, Merle finally admitted that the stories had not been true.

Merle’s relationship and subsequent marriage to Alexander Korda was to her advantage. She appeared in ‘The Private Life of Don Juan’ (1934) and was given leading roles such as Lady Blakely in ‘The Scarlet Pimpernel’ (1934), which also starred Leslie Howard. Through Korda, Merle secured Hollywood productions with Samuel Goldwyn and earned an Academy Award nomination for ‘The Dark Angel’ (1935) with David Niven. Merle also appeared in ‘These Three’ (1936), ‘Beloved Enemy’ (1936) and ‘I, Claudius’ (1937), ‘The Divorce of Lady X’ (1938) and ‘The Cowboy and the Lady’ (1938).

Merle was involved in a car accident in London during the making of ‘I, Claudius’ and careful lighting and make-up helped to hide the imperfections she suffered as a result.

In 1939, Merle appeared in her most memorable role. For some years, Walter Wanger had been planning to make a film of Emily Bronte’s ‘Wuthering Heights’. Wanger had Merle in mind for the part of Cathy, and Charles Boyer for Heathcliffe. Merle wanted Douglas Fairbanks Jr for the part. Laurence Olivier was reluctant to accept the part because he wanted his wife Vivien Leigh to play Cathy. In October 1938, Olivier finally relented, but his relationship with Merle remained strained throughout the shoot. He refused to utter a word to her when a scene was finished. Samuel Goldwyn insisted on presenting a Hollywood version of England for the movie, which maddened the director William Wyler and Laurence Olivier. The film was an ordeal to shoot, but got great reviews.

Merle moved to America with the outbreak of war and married Alexander Korda in 1939. At their wedding, Korda presented her with a necklace once worn by Marie Antoinette. In 1942, Merle became Lady Korda when her husband was knighted. The couple divorced in 1945, and Merle married cinematographer Lucien Ballard, who devised a special lighting technique coined the ‘Obie’ (Oberon’s nickname). The device was mounted on the side of a camera and lit the subject head-on, thus reducing imperfections. Both Oberon and Ballard were of mixed blood: he being part Cherokee-Indian.

Throughout the 1940s, Merle appeared in 15 pictures, such as ‘That Uncertain Feeling’ (1941), ‘The Lodger’ (1944) and ‘A Song To Remember’ (1945). In ‘A Song To Remember’ Merle played Chopin’s lover, George Sand, opposite Cornell Wilde. It was a curious part for Merle to play, but resulted in her biggest screen triumph since ‘Wuthering Heights’ in 1939.

One of Merle’s last movie productions was the lavish ‘Hotel’ (1967), which was based on a novel written by Arthur Hailey. The movie also starred one of her lovers, Rod Taylor. Merle’s last screen appearance was in ‘Interval’ (1973), which she also produced and co-directed.

After Lucien Ballard, Merle married twice more. She married Italian-born Bruno Pagliai in 1957 and lived in Cuernavaca, Morelos, Mexico, with their two adopted children. In 1975, Merle married Dutch actor Robert Wolders, who was a quarter of a century younger than her. Among her many lovers were David Niven and Leslie Howard.

Merle was psychic and may have foreseen her death. She suffered a stroke from which she did not recover and died on November 23, 1979, in Malibu, California. Merle was 68 and beautiful to the end. She was interred at Forest Lawn Memorial Park Cemetery in Glendale, California.

Merle Oberon had been an enigma for most of her life. Mysterious and radiant, she had the power to captivate those who met her with her charm, kindness and elegance. A woman who was not only beautiful on the outside, but also on the inside. Today, Merle Oberon still enchants audiences with her haunting beauty and unforgettable screen presence.