Before I start this article, I’d like to point out that I am an avid user of Tumblr and a huge fan of its simplicity, sense of community and creative influence. As much as I love the site, I am forced to confront the increasing number of disturbing and heartbreakingly deluded posts that receive hundreds of thousands of shares on a daily basis.

As someone who has come face-to-face with the demons of mental illness, I’m desperate to stop this dangerous romanticisation – especially among young people.

This is a short extract from The Mirror newspaper, dated January 14 2014:

A teenage ballerina who was killed by a train escaped reality by creating a cocaine-snorting online character, an inquest heard.

Tallulah Wilson, 15, died just 24 hours after mum Sarah found out about her secret life and had her Tumblr account deleted.

Tearful Mrs Wilson told the hearing: “She made up this outrageous fantasy out of this person that took cocaine and drank, but the lies spiralled out of control.

“I asked her why she didn’t want to be Tallulah and she just said I didn’t understand.

“She told me she was finally happy, she didn’t think she could have friends in the real world.”

Mrs Wilson added: “The site was incredibly disturbing. I saw one girl post a picture with a noose and the picture said, ‘here’s your new necklace, try it on’.”

I think the most twisted part of that brief summary is Tallulah’s remark that she “had 18,000 people that loved her for who she was online”.

The online Tallulah wasn’t real. It’s almost impossible for anyone to be real online. As soon as you turn off that computer screen, you realise that everything is temporary. That famous Instagram account with thousands of loving followers could belong to the quietest girl in your class. How would you know? Would it still be cool if you knew who was behind it? We belong to a generation so blinded by bright screens that we forget there’s real people at the other end.

Now, for anyone that has never logged onto Tumblr, it is important to note that the main trend among users is to conform to a kind of virtual-subculture and dedicate your entire blog to one ‘theme’. These vary from the innocent – ‘Tropical’, ‘Kawaii’, ‘Baby Animals’, to the more disturbing – ‘Dark Pale’, ‘Grunge’, ‘Horror’.

Let’s focus on one of these so-called themes: ‘Soft Grunge’. A quick Urban Dictionary search gives us this definition:

“A term generally used to describe modern-day teenagers, typically girls between the ages of 14-18, who like to create a ‘hardcore’ persona on Tumblr by reblogging pictures of inverted crosses, dip-dyed hair, ying-yang symbols and toilets.”

A quick search on Tumblr for ‘Soft Grunge’ gave me the following posts in a matter of seconds: 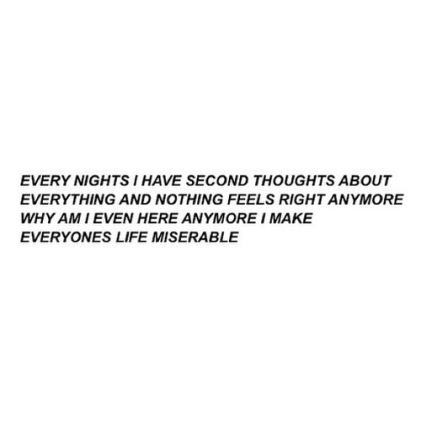 The hashtags for these images included ‘depression’, ‘anxiety’, ‘hipster’, ‘cool’ and ‘pretty’.

Am I seeing this right? This is a culture that idolises sufferers of depression, encourages self-harm and puts forward the idea that suicide is just a super-cool way to get rid of your sucky teenage problems.

Describing depression and anxiety as ‘cool’ and ‘pretty’ is wholly inaccurate. I’m fairly confident in assuming that most of the people sharing these images have never experienced any sort of mental illness (a 2010 study by the online therapy service mentaline.com actually showed that an alarming 34% of young people admitted lying about having a mental illness to their peers).

This makes their comments even more terrifying, as it means words like ‘cool’ and ‘pretty’ are what come to mind when they think of depression and anxiety. If I could even begin to describe my own battles with depression, I would define it as a complete loss of personality. It feels as if your life is permanently on pause, while everyone else’s is on play. The last thing I would want to do in such a state is take a picture of some ripped jeans and stick a haiku about the weather over it.

I guess all I want is for people to start valuing happiness over sadness. One Buddhist quote explains that ‘Thousands of candles can be lit from a single candle, and the life of the single candle will not be shortened. Happiness never decreases by being shared’. If just one person caught sight of a positive message online rather than these ridiculous ‘Soft Grunge’ posts, it could free them from their lonely spiral of depression.

Mental illness is not cool. Self-harm is not beautiful. The pictures and people on Tumblr are make-believe. Turn off your computer and have a real conversation with a real person. The answers to all your questions can be found inside yourself, not inside your laptop.